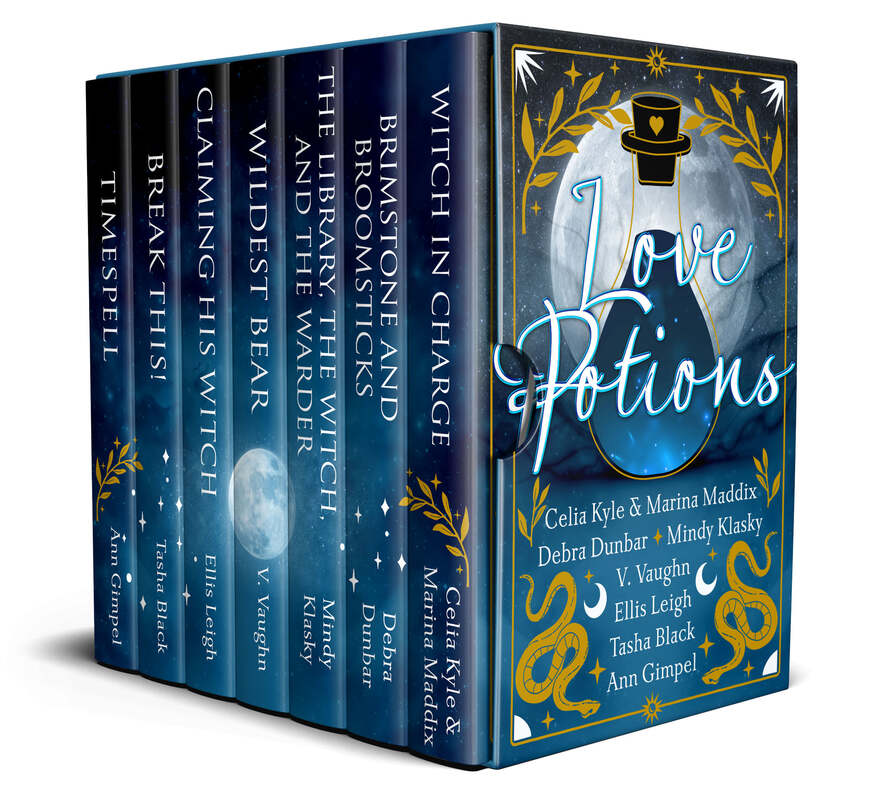 Enjoy the magic of love with us! This collection of witch romance stories by six NY Times, USA Today and Bestselling authors will trap you in its spell. This box set is designed to introduce you to new authors and new series. Happy Reading!

After her coven shuns her for a mating prescribed by the fates, water witch Azurine will have to break every boundary to prove her love, her loyalty, and that the Fates couldn't possibly be wrong.

A family of witches, a sexy stranger, a missing werewolf, and a whole town of paranormal suspects! Who knew a demon could be so hellishly sexy? Or that his arrival could cause so much trouble in a town full of werewolves, trolls, and harpies?

It's all fun and games until Kelly's gargoyle statue turns into a real man... Except, Kelly has far more important things to focus on--such as finding her family's missing spell book so she can figure out how to rein in the uncontrollable Hollow House, impress her dubious boss, and break the curse that turns Ronun to stone for half the day.

The Library, the Witch, and the Warder - Mindy Klasky

David Montrose has been fired from protecting Washington’s witches, and now he’s stuck in a dead-end clerical job. His father says he's disgraced the family name. Instead of sympathizing, his best friend is dragging him into an all-out supernatural war. When David is summoned back to warder status, he must figure out how to juggle work, warfare, and warding—or all of magical Washington will pay the price!

Sparks fly when a world class MMA fighting bear shifter, and a plus sized model with a special talent end up as unlikely allies. Thea knows Chance is off limits, so why can't she help losing herself to desire every time he's near?

Katerina eats, sleeps, and breathes cultural anthropology, her single-minded focus a hedge against concerns something isn’t quite right. She’s on a lecture tour in the Scottish Highlands when hallucinations grab her, visions rife with horrors straight out of medieval folklore. A hunky arch Druid figures things out, but selling Katarina on her witch heritage is way harder than he anticipated.

Twins are a lot of work, even for a witch. But when the toddlers start shifting into bear cubs in a world where they are not welcome, Tally and Marcel have to find a way to keep them, and their marriage, safe.

Grab your copy of this collection of previously published fan-favorites for $0.99 now!