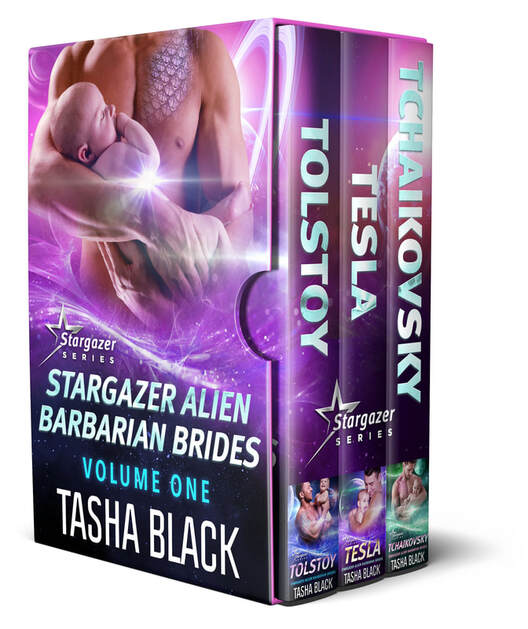 Each of these alien barbarians is achingly gorgeous, strong, and wild... but not for long.

Tolstoy:
When Leo awakes from stasis to the scent of a blood mate, he is stunned to discover the delectable creature is human. Being close to her sets his senses on fire, but he knows the attraction can only end in misery. What human could ever love a shape-shifting barbarian? And when the two uncover a baby who just might be the priceless clone of a famous cultural icon things really start to get interesting…

Tesla:
Nick has just awoken from stasis to find himself alone on the luxury cruiser he was hired to defend. He’s looking for answers, but finds something he never expected - his blood mate. Raina is brave and beautiful, and Nick burns for her from the moment he sees her. But it’s hard to trust a human, especially when she is only onboard to steal things.

Tchaikovsky:
Peter has always been the strongest of his brothers. But being captured and forced to serve on the pleasure ships until his brothers broke him out has changed him. The big alien is confident on the outside, but broken inside. He never expects to share a physical connection with another being. But the human scavenger aboard his vessel awakens both his lust and his most violent protective instincts. Angel will be his blood mate, if Peter dares to let her into his bed and his heart.