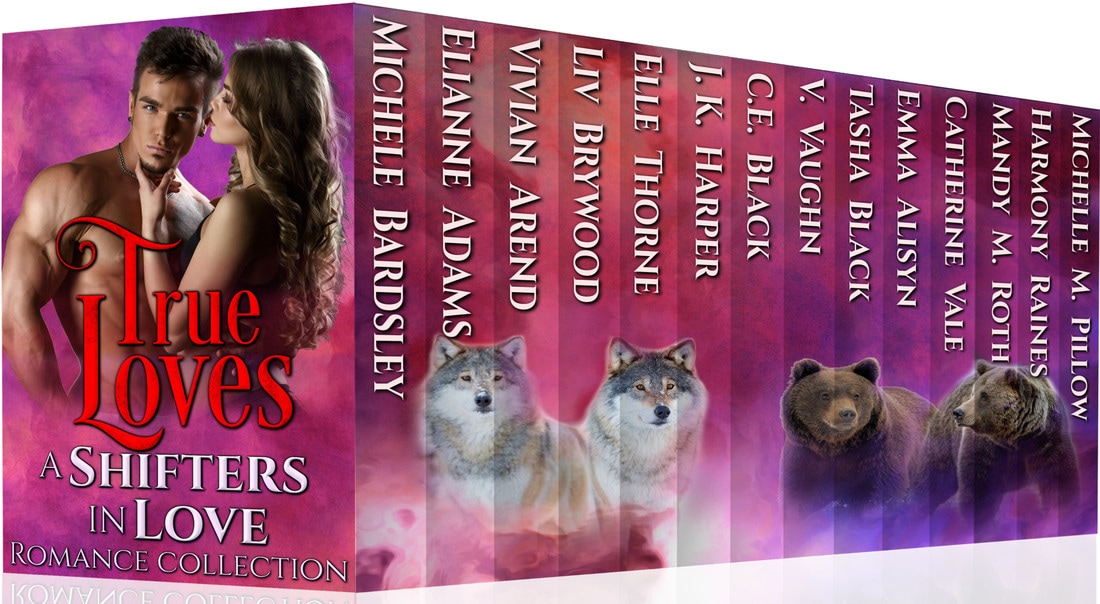 Bake This! -Tasha Black Sexy shifter Will Harkness has always enjoyed being a lone wolf. So when a voluptuous but accident-prone witch shows up for the holidays, Will is surprised to suddenly find that he wants more. If only she can stop breaking things long enough for them to get to know each other better...
Protector Wolf - J.K. Harper Jace Canagan has a last chance shot at being a Guardian for the Black Mesa Wolf Pack. Then sexy Caitlin Rendall strides into his life with her adorable twin cubs, challenging all his ideas of what it means to be a protector wolf.
Black Velvet - Elianne Adams With her old pack dead and buried, wolf shifter Joy Sutherland leaves her beloved Akino lands to seek refuge with the Eryma pack of Timmins. When she discovers Warren, her new Alpha, is also a Dom with the skills to handle her, hope flares to life. But if she can’t convince the rest of the pack to accept her, she—and her wolf—could lose their mate forever.
Kiss Me Cowbear – Liv Brywood When Jessica arrives at the Curvy Bear Ranch with her five-year-old son, she never expects to meet sexy bear shifter Clint Wilson. The ruggedly handsome cowboy is everything she ever wanted in a mate. But with a shattered marriage in her past, she’s not sure she’ll ever be ready to commit to someone again.
Embraced – C. E. Black Lonely and more than a little depressed, Sean finds himself in a small town bar, drinking his sorrows away, knowing the woman he loves will be married the next day to her true mate. But when he meets Sarah, they’re both surprised at the intense attraction they share. The night is filled with a passion neither can forget, leaving Sean wondering how he could fall for another woman he cannot have.
Seduction – Elle Thorne Astra Evans is a curvy, delicious firebrand who thinks that the only good shifter is a dead shifter. With two exceptions. And Kane Ortiz is not one of those exceptions.
Stormchild (Pacific Passion 1)- Vivian Arend Doctor and shaman for the Pacific water-shifter clans, Matthew Jentry resolved to avoid the sensual temptations of his people. Until the mysterious Laurin Marshall crosses his path, and resistance ignites into a blazing night of sexual fireworks. One night is all they're willing to take, but fate has other plans...
The Mighty Hunter (Lords of the Abyss 1) - Michelle M. Pillow Caderyn is the sexiest--and perhaps craziest--man Bridget has ever laid eyes on.  Sparks fly. Desires heat. But there’s one small problem. He claims they’re trapped in the lost city of Atlantes, living on a cursed island deep within the ocean.
Pisces Phenomenon (Zodiac Series 1)-- Mandy M. Roth Detective Sirius Baron’s world is full of magik, power, immortality and egos that tend to cloud better judgments. It's also full of honorable warriors who are sworn to protect the people of the Earth. Sirius is one of these warriors and will stop at nothing to protect the woman he loves.
Bear’s Touch- Emma Alysin A Healer who can kill with a Touch. An Alpha Bear determined to save his son. Will they clash- or will they accept their bond? When Lea reluctantly travels to a strange Clan in order to heal a dangerously injured young Bear, Alpha Yurii promises he won't try and matebond her to him. But resolve flees when he sees the snarky, curvy female for the first time. Is a fated matebond worth risking freedom- or her life?
Fated and Mated - Love at First Site  - Harmony Raines Cassie is helping Marjorie set up the new website for her shifter online dating agency, Fated and Mated. What she never expected, was to be the first success story. Will things run smoothly? Find out in this paranormal romance, contains smoking hot shifters and a happy ever after!
Run Fur Love - Catherine Vale Harley Myers can smell a shifter a mile away. And she can smell trouble, just as easily. And now, both are wrapped up in the drifter at the end of her bar. The drifter with the killer smile is a man of many secrets. If Harley isn’t careful she’ll find her heart is on the line, along with her life.
Cry Wolf - Michele Bardsley Fierce Elle wants to escape nightmarish memories. Alpha Xavier wants to claim his destined mate. Together, they must face their fears—and their enemies—to save the future of their wolf pack.