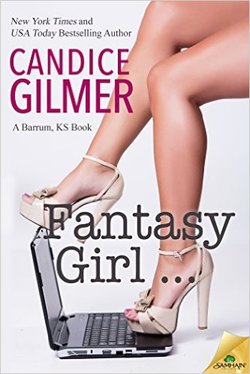 His fantasies will kill her.

By day, Lynn Broadmore leads a boring life as a mild-mannered bookkeeper, enduring one blind date after another. But by night, she’s “Hush,” webmistress extraordinaire, writing naughty stories for her adoring legion of Buffy the Vampire Slayer fan fiction minions.

Now that there’s a new guy working in the next cubicle, though, real life is getting interesting. All Jack has to do is smile, and her insides turn to goo. To her complete surprise, she might even stand a chance against the office bimbo.

Undercover FBI agent Jack Edwards is on the hunt for a serial killer who trolls the Internet for victims.

The trail has led to Lynn’s virtual doorstep, and he’s ready to do whatever is necessary to bring the killer down—including using two secret identities to gain her trust. Things get complicated, however, as the goofy fan fiction writer gets under his skin and starts staining his brain—and his heart.

Distractions are something he can’t afford right now…not if he’s going to keep her from getting hurt in what she thinks is a safe, on-line hideaway. Because between the pixels lurks a murderer.
​
And he’s chosen Hush, his fantasy girl, as his next target.

​Get it now on Amazon!

Get it now on Nook!

Get it now on iBooks!

Get it now on Kobo!

Get it now on GooglePlay!